A fundamentally precise and simple linear motion axis design is discussed where the attractive force from the linear motor is used to preload a carriage supported by six rigidly-attached porous carbon air bearings. The air bearings are assembled by vacuuming the pads to two orthogonal planes, positioning the carriage above the pads, and then injecting epoxy between the bearings and the carriage. Control of flatness tolerances of the bearings and planes permits over-constraint of the carriage by the bearings, which leads to a high degree of accuracy and moment load capacity via elastic averaging. Good dynamic stiffness is also obtained because of large bearing area and squeezed-film damping. The two orthogonal planes represent an accurate and cost effective geometry that can be created to guide linear motion; and by placing the open-faced iron-core motor at the desired position and angle with respect to the bearings, preload forces with equal or otherwise desired relative magnitudes are obtained. Because the attractive force is typically 3-5 times the axial force generated by the motor, the system is inherently stable even in the presence of large externally applied moments that might otherwise induce excessive pitch, yaw, or roll errors.

Linear motion axes are ubiquitous in manufacturing systems, where for high speed or high accuracy systems, rolling element bearings or pressurized fluid bearings are most often used. To reduce cost and increase simplicity, open-face iron-core linear motors are desirable for high-speed systems, but they can cause excessive loading and premature failure of rolling element bearings.

Fig. 1 illustrates a concept for a fundamentally precise and simple linear motion axis where the attractive force from the linear motor is used to preload a carriage supported by air bearings, although this arrangement could also preload other types of bearings depending on the application. The six air bearing pads are assembled by vacuuming the pads to two orthogonal planes, positioning the carriage above the pads, and then injecting epoxy between the bearings and the carriage. The result is accurate and rigid support of the carriage achieved by elastic averaging. In addition, the large bearing areas and small gaps provide squeezed-film damping so good dynamic stiffness is achieved.

A pair of orthogonal planes is a very accurate and low cost geometry that can be used to guide linear motion. By placing the motor at a desired position and angle with respect to the air bearing pads, a desired distribution of preload forces can be obtained on the pads; hence when a new machine is designed, the preload can compensate for large static weight distributions. Because the attractive forces are typically 5 times the axial force from the motor, the system is inherently stable even in the presence of externally applied forces and moments.

This concept can also be used with angular motion axes, particularly where partial rotary motion is required, as shown in Fig. 2. An advantage of this type of design is that it can be rapidly assembled from modular components.

Fig. 2 Motor-preloaded-bearing angular motion design concepts where fundamentally the rotor is an arc segment. Left view shows an iron-core open-face rotary electric motorâ€™s permanent magnets are located on a conical surface and used to preload aerostatic bearings. Right view shows conical bearings with magnets that would be on a cylindrical surface.

In a sense, the evolution of this concept started in the early 19th century when Joseph Whitworth championed the three-plate scraping method and described “the vast importance of attending to the two great elements in constructive mechanics, namely a true great plane and the power of measurement” [1]. Accordingly, for many years vee-and flat ways and then double vee-ways used gravity to preload machine tool carriages [2]. Later, James Bryan of LLNL would championed the use of DC direct drive motors for friction drives [3], and Anwar Chitayet, the founder of Anorad Corp., unwrapped DC rotary motors into linear electric motors for direct drive of machine tool axes [4]. Meanwhile, Rasnick at ORNL developed a robust method for manufacturing porous carbon air bearings for machine tools [5], which Devitt of New Way Air Bearings evolved to offer modular off-the-shelf bearings.

In the late 1980’s, Van Deuren from Philips Corp. created a kinematic arrangement of five air bearing pads mounted on hollow stems connected to air supply ducts integrated with an extruded carriage structure, and preloaded with an open-face linear electric motor [6]. Because of its robust kinematic design, this design would only require modest accuracy of the flat bearing surfaces; however, the five bearing pads on ball joints would limit the ability of the carriage to resist heavy external moment loads.

An example application of this arrangement is for high speed shuttles in semiconductor manufacturing equipment. However, such kinematic arrangements of air bearings on pivot joints, which allow the carriage to run on what might not otherwise be a straight enough surface, may not provide sufficient tilt stiffness and damping for a carriage that must withstand heavy external machining loads.

Meanwhile, Devitt and Slocum developed a method for vacuuming fluidstatic bearings to flat bearing rail surfaces, positioning and aligning a carriage atop them, and then injecting epoxy to accurately and rigidly anchor the bearings to the carriage [7]. They used this method to create hydrostatic bearing-supported carriages in a classic format where the carriage supported by modular fluidstatic bearings wrapped around the bearing rails. The first machine of this type was an all-ceramic structure grinding machine with modular self-compensating water hydrostatic bearings [8]. Devitt also used this method with porous air bearings he supplied for many different types of machines. The next advance used this method to make the bearings a rigid integral part of a carriage, but instead of using a wrap-around design for preloading them, an inclined, open-face, iron-core, linear electric motor was used. With six bearings rigidly anchored to support the linear motion carriage, the system was over-constrained, but allowably so because of the easily attained accuracy of the two flat planes. This gave the carriage very high pitch, yaw, and roll stiffness [9, 10] and the ability to resist heavy external moment loads such as encountered when machining.

A key element of any fluid film bearing is that large areas and small gaps results in a large amount of squeezed-film damping, which is inversely proportional to the third power of the bearing gap. On the other hand, bearing stiffness is inversely proportional to the gap; hence combined with the mass of the system, dynamic performance can vary widely, and it is impractical to generalize on what is the optimal bearing gap. It has been proposed that machine performance can be optimized in real time by dynamically controlling the bearing pad position and/or the bearing gap. For example, spindle designs have been tested that use piezoelectric actuators to radially adjust the position of fluidstatic bearing pads supported by flexures [11] which in effect controls spindle error motion and also can affect the bearing gap. With this design, dynamic radial motion of a spindle at 1000 rpm can be reduced by 50%.

Liquid bearings do not suffer from pneumatic hammer caused by excessive volume downstream of the restrictor, and though this enables control of the pressure in the bearing pocket using a servo valve [12, 13, 14], it leads to increased cost and complexity. A compromise is a diaphragm type restrictor, where the inlet flow resistance is made proportional to the flow using a diaphragm [15].

Devitt of New Way Air Bearings uses a hybrid approach , where porous carbon bearings physically contact the rail surface, while providing air pressure to counteract most of the static force the bearings must support. In this method, the effect of the gap is essentially eliminated, but the system does require a high mechanical impedance actuator, such as a ballscrew, to overcome the static friction that is present.

Accordingly, this paper describes the design process and analytical methods used to design a grinding machine based on the motor-preloaded-bearing principle as it has evolved to this day: The rigid attachment of six aerostatic bearings to a carriage such that its motion accuracy and stiffness on two orthogonal precision planes is enhanced by elastic averaging, and it is preloaded by the attractive forces from an iron core linear electric motor.

Porous graphite bearings were selected for the design because they are very damage resistant. Static performance of porous carbon air bearings can be predicted [5], and for commercially available bearings, design data (bearing gap as a function of area, pressure, and force) is typically directly obtained from the manufacturer as shown in Fig. 3. 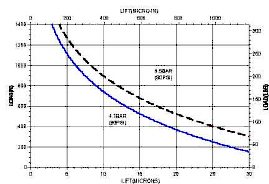 Table 1 shows data taken from Fig. 3 and analyzed to give the observed efficiency h which is obtained from stiffness = h *Area*Psupply/(gap/2). The bearings have an “optimal” design region where the gap (lift) is 6 to 15 microns. When the supply pressure is increased, the stiffness decreases because the gap increases for a given load, and the damping z also decreases. Curves were fit to the data for these bearings at 4 bar supply pressure to provide design estimates for the gap, given the applied load, and the resulting stiffness: