Learn about air bearing history and the advancements that have been made over the past two centuries from early orifice bearings to the Porous Media™ technology that New Way Air Bearings manufactures today.

Wills Publishes Earliest Document On Air Bearings
Robert Wills publishes a book chapter for the Cambridge Philosophical Society titled “On the Pressure Produced on a Flat Surface When Opposed to a Stream of Air Issuing from an Orifice in a Plane Surface.” The publication discusses how orifices are used to control air into a gap to carry a particular load. Many air bearing technologies still apply this fundamental principle.

Albert Kingsbury, attributed with the invention of the tilting pad thrust bearings that revolutionized thrust bearing designs, experiments with a 6” diameter journal bearing supported on externally pressurized air. He was addressing a manufacturing challenge of matching bore and shaft geometry and size to achieve a consistent 0.0005” gap all the way around. Small gaps are required when using air because the viscosity is so low. 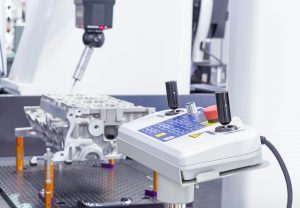 Find Out What
Porous Media Air Bearings
Can Do For You