Home » Design Basics » What Is An Air Bearing?

What Is An Air Bearing?

What is An Air Bearing?

Unlike contact roller bearings, air bearings utilize a thin film of pressurized air to provide a frictionless, loadbearing interface between two surfaces which would otherwise contact each other. Since air bearings are a non-contact technology, they avoid long-standing tribological problems like friction, wear and the necessity for lubrication. This set of traits provides air bearings with unique advantages for precision positioning and high speed applications, such as their positive relationship between stiffness and damping.

Air bearings are far from a new technology, with their roots tracing all the way to Robert Wills in 1812 and his paper “On the Pressure Produced on a Flat Surface When Opposed to a Stream of Air Issuing from an Orifice in a Plane Surface.”Their history winds through the paths of engineering luminaries like George Westinghouse, and into the modern era. They’ve been used by DOE National Labs and IBM, who saw value in their often incomparable set of operational characteristics.

This same restriction maintains pressure under the bearing and acts as the load bearing surface. If air were introduced into the gap without restriction, fly height and air consumption would both be higher than necessary, and stiffness would be lower than that which could be achieved with proper restriction. This restriction is referred to as air bearing compensation, and is used to optimize the bearing with respect to load, lift, and stiffness for each individual application. 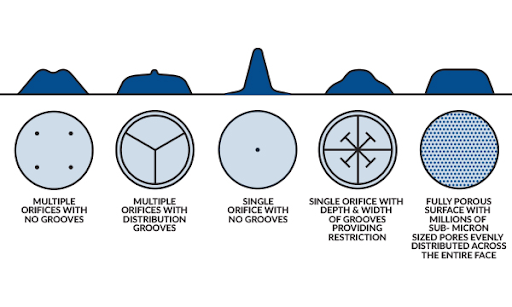 In the past, air bearings have made use of drilled orifices or slots in the bearing face to produce their fluid film. However, with orifices or slots, the bearing face experiences a highly uneven pressure distribution. New Way Air Bearings® makes use of our proprietary Porous Media Technology™. Our perforated graphite surface allows for an even force on the guide surface, producing a far more stable, resilient product.

We invite you to read further on the history of air bearings and their distinctions from orifice bearings, and then read our full application and design guide, which provides you with a complete technical overview of the technology, and all the information you need to evaluate its applicability to your use case. 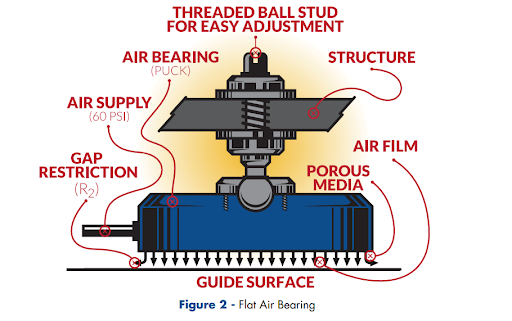