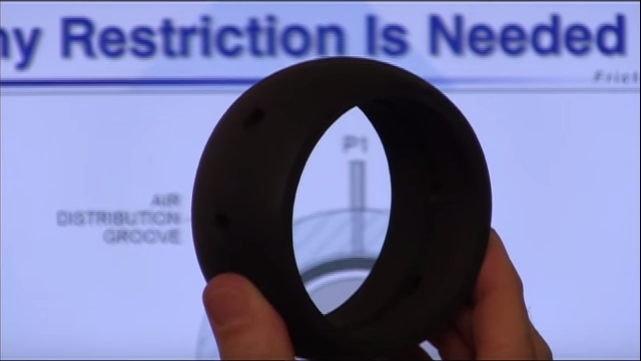 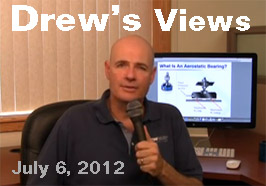 Welcome to the July 6, 2012 edition of Drew’s Views. In this video post Drew covers the characteristics that distinguish air bearings from every other pneumatic system: Restriction and Compensation. And you’ll see why porous media air bearings provide an advantage over orifice bearings. To see the video, just click ‘Read More’ and then ‘Play.’

Drew starts by utilizing a side-view, cutaway illustration of a flat round orifice air bearing.

Using this image, he shows that there are two basic restrictions relating to air bearings: The input pressure through a restrictor, and then also the air gap is a restriction as well. The restriction of the air flowing through the gap is what is actually carrying the air bearing’s load. The pressure in the gap multiplied by the area has to equal the load that is being placed on it.

As a very rough estimate, if your input pressure is 4 bar, restrictors are usually designed to give you 2 bar in the gap. Then, as you increase the pressure to the bearing, the gap will get smaller, with (relatively) less flow through the orifice, while creating a higher pressure in the gap.

The Lift-Load Curves found at the product level on the New Way Air Bearing web site show that as the load on the air bearings increases, the air gap gets smaller, but the pressure in that gap rises. This is the idea of ‘Compensation.’ It is what gives air bearings a relatively high degree of stiffness.

Drew then introduces Air Bushings to the mix, a slightly more complicated system, starting with an orifice-based air bushing plumbed to provide air pressure to the orifices. Although it is more complex, the air bushing provides perhaps the easiest visual understanding of how Restriction and Compensation work.

A side view of this orifice-based air bushing, with a center shaft as the bearing guide, and a single tube providing compressed air to ports at the North, East, South, and West of the bushing, enables Drew to show that the air will take the path of least resistance.
The flow through the gap is a cubed function of the gap, so there’s actually less restriction when you have all the air coming out one side. So in the first illustrated scenario, the shaft has no reason to center itself.

Scenario 2 shows the same orifice air bushing with the same ports at the North, East, South, and West of the bushing. This time, however, they are NOT plumbed together. Instead, there are four separate pumps. This would provide a compensating effect. If you were to put a load on this bushing, the Southern gap would get smaller, and the pressure would go up.

Scenario 3 shows the same illustration, with the addition of an annular groove around the inside of the bushing wall. This derives the same result as Scenario 1. Without Restriction, all the air pressure would make its way along the groove back to the top of the bushing, eliminating Compensation. So, again, the shaft would not center itself.

Scenario 4 shows a hydrostatic system – using oil or water – in the same North, East, South, West porting scenario (using four individual pumps to supply the air pressure. This time, the illustration also includes ‘pockets’ surrounding the air pressure orifices. The advantage is that an engineer can get the same pressure across such a pocket. Obviously, this will not work with air because it is significantly more compressible, so when you have thick layers of it, it loses stiffness, and it becomes subject to ‘pneumatic hammer.’ But with oil or water you can actually increase the amount of average pressure in the gap.

With an orifice-based air bearing, these pockets provide no additional efficacy. Instead, the air will just flow ‘North’ to the bigger gap.

Scenario 5 adds Restrictions of some kind to each of the North, East, South, and West orifices, whether that means a jeweled orifice, a capillary, or some technique designed to restrict the flow.

Again, as the shaft becomes ‘displaced’ by a load (above the North air bushing port) the gap size below the shaft decreases, but the pressure there rises. While, above the shaft, the gap widens but the pressure goes down. This creates a balancing effect that is referred to as ‘Compensation.’

Scenario 6 shows the same set-up, with North, East, South, and West orifices on a bushing surrounding a shaft. This time, however, the load does not point directly at an orifice; instead it points ‘Southwest,’ directly in between the orifices. In this situation the pressure just won’t flow to where it needs to be (in ‘opposition’ to the load).

Scenario 7 shows the solution that engineers and designers will often employ to solve the situation outlined in Scenario 6. They will add more orifices. In this case, Southwest, Northwest, Northeast and Southeast, for a total of eight.

This solution is technically superior to Scenario 6, but it will also be more expensive in machining time, restriction element costs, porting, tubing, and ongoing air pressure supply. But the shaft is technically better suited to center than the previous scenario.

Scenario 8 shows the way that Drew recommends: The use of new Way Porous Media TechnologyTM in the form of an Air Bushing. Instead of discrete, visible orifices, New Way uses a porous media face for restriction. It features millions of sub-micron sized holes distributed evenly across the 360 degrees of the bushing’s Inside Diameter (ID).

In this scenario, the compensation happens right at the gap, which is really the best way to provide that compensation. 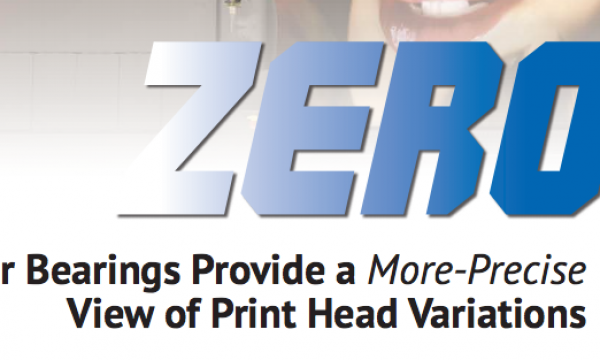 Welcome to Drew’s Views for June 22, 2012. This is just a quick edition designed to let you know that there is a nice article in the June 2012 edition of Power Transmission Engineering (PTE) Magazine featuring New Way Distributor AXIS New England and printer manufacturer EFI. Here is a link to the article, which…