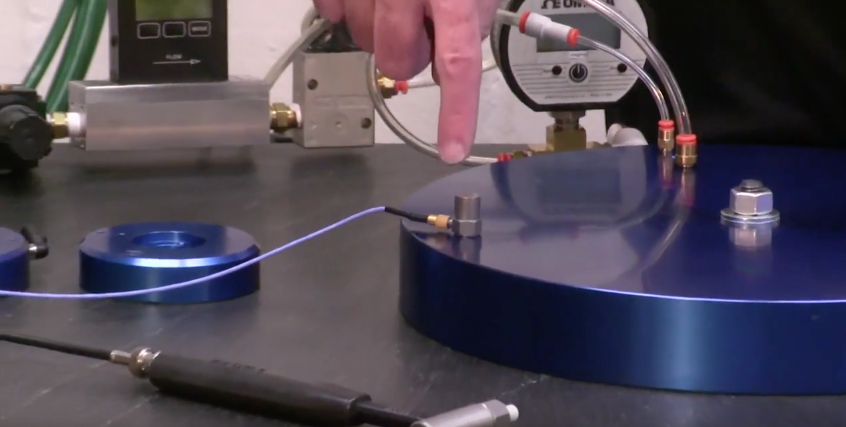 Welcome to the March 22, 2013 edition of Drew’s Views. This is the second video post filmed during independent testing in the Machine Dynamics Lab at Penn State University. This time, Theodore R.S. Deakyne performed the Air Film Dynamics testing under the guidance of Dr. Eric Marsh, Professor of Mechanical Engineering at Penn State, and Director of the Lab. Ted Deakyne and Professor Marsh were, again, kind enough to allow Drew to film the proceedings. To see the video, just click ‘Read More’ and then ‘Play.’

The subject was a large custom VPL Air bearing: It is 13in in diameter, and a full 2” thick. There is an 80in2 vacuum area in the center of this bearing, and 35in2 of air bearing pressure land at the perimeter. The two regions are separated by an ambient groove.

The porous media face of the VPL Air Bearing features millions of sub-micron sized holes, through which the air pressure is evenly distributed. By balancing this air pressure with vacuum pressure, it enables the latter to hold the bearing down while allowing the former to simultaneously lift it from a guide surface. By adjusting the vacuum and the pressure separately, the fly height and stiffness of this vacuum preloaded air bearing can be optimized.

The laboratory set-up was much the same as was used for the 90mm VPL Air Bearing shown in our February Drew’s Views video blog. Testing was conducted on a granite surface using:

The vacuum pressure and the air bearing pressure were adjusted in order to study the change in the dynamics of the air gap.

With 60psi input pressure to the bearing, and no vacuum force, the bearing floated on a relatively un-stiff air film. There was an axial mode at 36Hz, and a tilt mode shape at 50Hz.

These are very high frequencies and very high damping numbers to be associated with a structure this large (the bearing was about 25lbs).

We look forward to making Ted Deakyne’s Report available as soon as it is completed.

And, once again, thank you to Dr. Eric Marsh, Ted Deakyne, and the Machine Dynamics Research Lab at Penn State University. 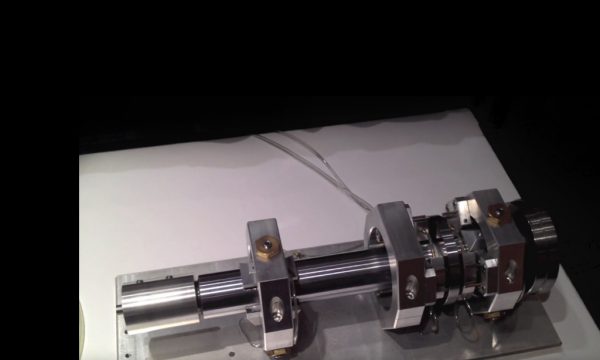