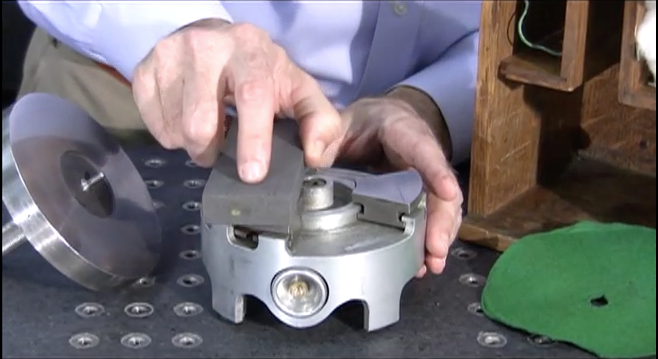 Welcome to the March 12, 2012 edition of Drew’s Views. Drew “introduces” Tilting Pad Bearings using a Kingsbury Demo Kit from the 1920s. Though these bearings were invented before the turn of the LAST century, the concept still flies today. Drew sees future applications for air bearings based on the same principles. Click ‘Read More’ and then ‘Play.’

Drew borrowed this antique sales kit from friend, colleague, and competitor Dave Arneson of Precision Instruments (PI). It’s practically a piece of commercial art, over a hundred years later. But the Tilting Pad Bearings inside – Kingsbury called them Thrust Bearings – are anything but delicate to have lasted so long.

Drew puts them through their paces, showing them off, preparing them, and then replacing the rotor to demonstrate the function of the unit. Spinning the rotor up to speed creates a thin air film, maintained by the bearings, until the friction caused by the rotor’s center pin slows it down enough to make contact, eventually stopping rotation.

This eventuality is clearly illustrated by the light on the front of the demo unit, which begins flashing until, finally, it is steadily lit. This is because, after spinning the unit up, Drew holds the kit’s (original!) connecting wire between the floating rotor and the stationary base of the unit. Only when the friction degrades the air film enough to cause intermittent, and ultimately continuous, contact is the circuit completed, causing the light first to flash, and then to hold steady.

Though this is a fun little demonstration, it also illuminates many potential future uses for New Way’s Porous Media Technology. Tilting Pad Bearings were used extensively in large motors, ship propulsion, large generators, and turbo equipment. These are ideal applications for air bearings as well.
Drew concludes with a bit of history on the pioneering Albert Kingsbury (inventor of the Tilting Pad Bearing) who worked with Edison and Westinghouse on the original electric turbines

For more information about Albert Kingsbury, you might be interested in an article by Jim McHugh, a Consultant from Tucson, Arizona, which appeared in the October 2003 Issue of Sound & Vibration Magazine. Titled ‘Albert Kingsbury – His Life and Times,’ this 10-page article provides an excellent primer for his work. This article may still be found on the Kingsbury, Inc. website. 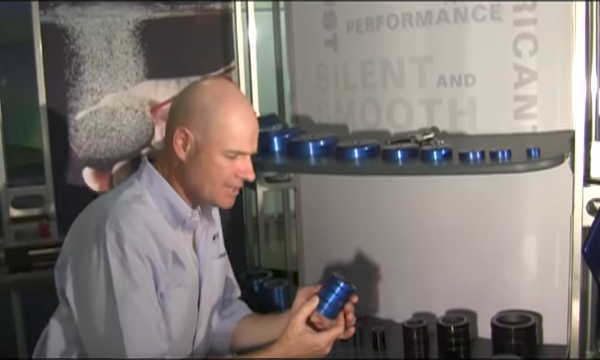