Aston, Pennsylvania, USA – May 12, 2011 – New Way® Air Bearings, the world’s largest independent manufacturer of porous media air bearing products, announced that it has launched the “Drew’s Views” Blog. This bi-weekly online publication will provide 24 ‘views’ per year – short essays covering a range of subjects surrounding Frictionless Motion®️. The new Drew’s Views blog can be found on the web at: web.newwayairbearings.com.

“Collaboration is what energizes our organization,” noted Nick Hackett, New Way president and CEO. “That’s why we made the decision to start this blog: Because each post is an opportunity for interaction. Innovation is a two-way street; and we want to initiate that kind of dialogue with engineers worldwide.”

The New Way business model is built around the application of porous media air bearings to help solve the problems mechanical engineers encounter…especially involving friction. For many New Way customers, air bearings are an enabling technology; one which has vaulted them to the top of their market. So the value of the information exchange can be transformational.

Few are better positioned to weigh in than New Way founder, chairman, and CTO Drew Devitt. He is a globally-recognized authority on the subject. The company was incorporated in 1994, but Devitt has actually been manufacturing air bearings since the early 1980s. He has been awarded four patents, and New Way protects a significant amount of proprietary technology, process, and information. Personally, Devitt has authored numerous related articles, and he has served as president of the American Society for Precision Engineering (ASPE).

“We’ve titled the New Way blog ‘Drew’s Views,’ because it’s a nice mnemonic device,” Devitt noted. “But we really consider those views the launching point for a productive conversation. We want to encourage the input of engineers everywhere, and a healthy exchange of information that will move all of our organizations forward.”

New Way’s objective is to develop the “Drew’s Views” blog into the preeminent online forum for Frictionless Motion®️. So when mechanical engineers have a problem or ‘pain point’ that is best solved with the elimination of contact, this new blog will serve as both a community and a repository for solutions, specifications, and support. 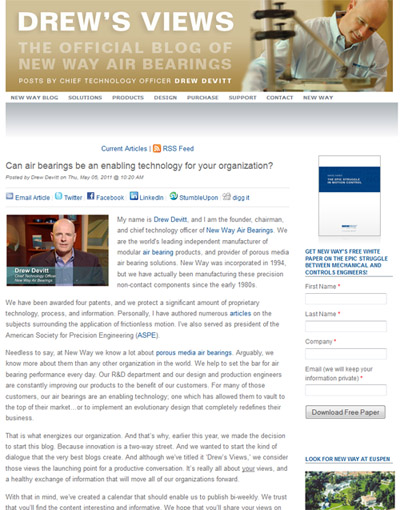 New Way has now been included on Inc. Magazine‘s list of the 5,000 fastest-growing, private companies in America for 2007, 2008, and 2009. In November of 2007, The Greater Philadelphia Chamber of Commerce named New Way recipient of its Technological Excellence of the Year Award for 2008. In both 2008 and 2009, New Way was named a Deloitte Fast 50 Technology company for the Philadelphia, PA, USA Region.