Sytech Systems, Inc. provides hardware and software integration solutions, and when a medical client required precision beyond what an off-the-shelf manufacturing robot could provide, they called New Way. We worked to integrate flat round air bearings, developing a system with motion error below 1/1000 of an inch.

Sytech Systems (Sytech) serves the automation industry with fully integrated hardware and software solutions. As the demand grows for automated precision systems, Sytech has been able to utilize its expertise from its beginnings in software for industrial vision systems. Sytech is now sought after to deliver entire automated systems from beginning to end. 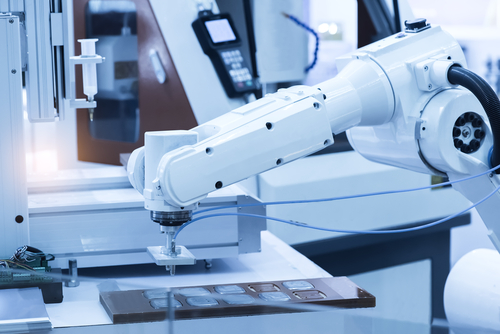 Brent Balika, owner and President of Sytech Systems, was familiar with the benefits of air bearings but hadn’t been presented with a problem which necessitated them. This changed when he was approached by a medical manufacturing customer with a malfunctioning system to integrate a dental tool for use in root canal procedures.

Sytech worked with New Way® Air Bearings to overcome the precision-positioning problem their customer was experiencing. The solution saved Sytech’s customer from “throwing away a significant investment” in a system they purchased from someone else, said Balika.

Determining the Need for an Air Bearing Solution

Balika and his team considered several options before embarking on air bearings. They considered solely utilizing measurements and position data, but it wasn’t close enough, largely due to the tight tolerances of the parts being integrated.

To integrate the dental tool, the robot inserts the end of a steel file into a brass handle where a crimping operation is performed. The nominal diameters of each piece along with the positioning tolerance of the robot made for an interesting problem:

Balika and his team found they were actually up against the operational limits of the robot. The customer even considered purchasing another robot, but the cost of abandoning the current one along with the cost of a new one was too great.

It quickly became apparent that Sytech needed something with very low friction. They needed to be able to precisely move the crimping equipment into position and hold it “within a couple ten-thousandths of an inch,” explained Balika.

“It just evolved an air bearing would be the way to do that,” stated Balika.

While Balika was familiar with orifice-based air bearing designs from his time previously spent in the packaging industry, he didn’t think it could meet the precision requirements he was facing. He knew the inherent permeability of the porous carbon could provide an even distribution of air, as well as fit in the small space available.

After a quick Google search, Balika found New Way and said it became very “apparent they were a solution-oriented company.”

With minimal designs and descriptions, Balika got New Way’s technical support engineer on the phone and was impressed with how he jumped right in. Together, they created a system to float the crimping operation on three flat round air bearings. Then, they were able to gently move the 30-plus-pound crimping assembly into position. Lasers were then used to correct positions for performing the final crimping operation.

After two or three conversations with New Way’s engineers, the solution moved forward at a “pretty rapid pace.” They were able to implement New Way’s products having never done it before, yet “very quickly” and with “very good results,” remarks Balika.

New Way’s solution, “melted into the background and we just took them for granted,” remarks Balika.

Their problem-free operation allowed Balika’s team to focus on other issues and problems.

The medical manufacturing industry is one of many industries facing unprecedented precision and tolerance requirements, but those can still be solved with traditional engineering support. Balika was impressed at how very knowledgeable and helpful New Way’s engineers were.

“They very much want to get into the details of your project to help you make it happen,” Balika says.

Balika gave some advice to future customers: “Get ready for an ‘old-school’ New Way experience.”

“Everything they said about how it would implement, what kind of reaction forces we would get—it was right on and lined up exactly with what New Way said it was going to be,” adds Balika. 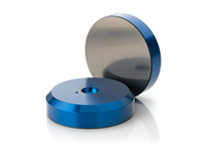 “We have no problem getting New Way to help us with a solution,” stated Balika.

Are You Ready to Overcome the “Anxiety Crevasse?”

Sytech’s successful integration made a grateful and pleased customer. While Sytech was fixing the system, the company was forced to use manual labor to perform this very tedious operation. With New Way’s help, Sytech was able to help their customer get back on track using the system as intended, allowing them to get products on the market more expeditiously.

Sytech’s solution also salvaged their customer’s $700,000 investment in a system that wasn’t working.

New Way’s robust products and unparalleled engineering support is critical to helping customers in the medical manufacturing industry and beyond to innovate new and disruptive technologies. To learn more about New Way’s products and services, contact us today for a complimentary consultation!