During the construction of the Very Large Telescope (VLT), the European Southern Observatory (ESO) partnered with New Way to build the “OzPoz” multi-fiber positioner. Air bushings and flat round air bearings formed the basis for this precision instrument, which required 10 microns in order to build a robotic system capable of aligning the telescope.

The European Southern Observatory (ESO) operates some of the most sophisticated telescopes in the world. Founded in 1962, the organization is supported by numerous European countries with the aim of providing world-class research facilities for astronomers. Over the decades, ESO has constructed a suite of telescopes, including the Very Large Telescope (VLT), which is regarded as the world’s most advanced optical instrument.

New Way® Air Bushings and Flat Round Air Bearings were used to meet stringent accuracy requirements in a multi-fiber positioner. This positioner, known as OzPoz, is used within one of the four telescopes to feed fibers into Nasmyth spectrographs. The successful integration of New Way’s products into OzPoz enabled observations of thousands of objects in one night, dramatically improving observation efficiencies.

A Closer Look at OzPoz

OzPoz was developed for ESO by the Anglo-Australian Observatory (AAO) (now known as the Australian Astronomical Observatory) based on the successful development of its own Anglo Australian Telescope. OzPoz contains a pair of steel focal plates, enabling one to be in use while the other is being configured. Optical fibers are fed into prisms housed inside magnetic buttons which attach to the steel plates. For the focal plate in the queue, the robotic system utilizes a ‘gripper’ to place up to 560 optical fibers into positions on the focal plane aligned to match those of specific celestial objects. 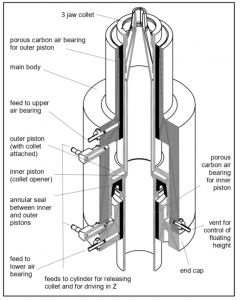 “Straightaway, we thought an air bearing was ideal,” stated Peter Gillingham, a design engineer on the project, when noting the accuracy within which the gripper needed to operate.

Gillingham and team attempted to build their own air bearing but failed. Gillingham explained, “We soon realized the porous carbon ones that were available from New Way were much more promising. The extreme accuracy with virtually no friction is so attractive.”

“The key item was the gripper,” said Gillingham. He explained that the gripper had to locate buttons anywhere on the plate “with a precision of about 10 microns.“ Additionally, the gripper needed to be able to rotate freely so it could be rotated simply by the tension of the optical fibers. The gripper solution needed “very good accuracy”, but also “virtually zero friction, certainly at least no static friction,” recalled Gillingham.

With this decision made, it naturally followed that the robot itself carrying the gripper would benefit from implementing air bearings as well. Not only could a robot outfitted with air bearings operate with high accuracy, but in principle, they could last forever since there would be no wear.

Another differentiating feature for Gillingham was New Way’s ability to provide both a standard line of components as well as an ability to customize. This flexibility was critical as the gripper would require a custom air bushing to be placed inside a machined component provided by Gillingham’s team.

“We can’t necessarily expect that from every supplier,” commented Gillingham. The robot design was more straightforward as it was able to accommodate the use of standard New Way flat round air bearings and air bushings.

OzPoz has been operating successfully since 2004. The performance and collaboration Gillingham experienced with New Way is why he says he “thoroughly recommends them.”

“New Way was excited to partner with the AAO/ESO to be used in this world-renowned telescope. It’s a privilege to know New Way is contributing to new discoveries and research of our galaxy and beyond,” remarks Rich Hesse, New Way Technical Sales Manager.