February 12, 2019 – ASTON, Pa. New Way® Air Bearing’s Annual Fun Day event is an opportunity to build camaraderie both within the company and with the local community. An important part of New Way’s mission, as a Philadelphia-based company, is to be a part of and give back to the local community. 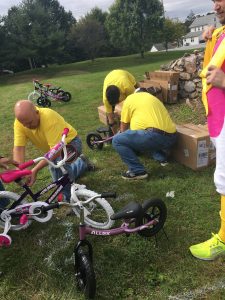 For this year’s Fun Day, New Way closed shop and went outside for some fresh air. While taking a well-deserved break from creating Frictionless Motion®️ with our Porous Media TechnologyTM, employees used their engineering and problem-solving skills for a different challenge: building bikes for local charities!

“We’ve been having an employee offsite ‘fun day’ for several years now with several team building events throughout the day,” explains Nick Hackett, president of New Way Air Bearings. “This year, Shawn Garrison, our VP of Finance, suggested we add in an event that benefited our local community.”

One of the team building exercises involved splitting up into groups and putting together four kid’s bicycles. Each team was given a box with all the parts inside. Groups were timed to see who could build their bikes the fastest. But teams weren’t just rated on speed, they also had to produce a quality product, i.e. the bikes had to work. After each team finished, the bikes were tested for rideability.

New Way employees built 24 bikes that were donated to local businesses that ran toy drives in December during the holiday season.

The annual Fun Day is yet another way New Way works to build supportive and collaborative relationships– from within the organization and out into the local community. “Part of our mission as a company is to be a community partner, and this is one small way that we are able to give back a little,” says Hackett.

Combined with the annual Manufacturing Alliance of Chester and Delaware Counties networking event and their participation in the What’s So Cool About Manufacturing? contest, New Way really puts being Philadelphia-based and community focused front and center.

New Way® Air Bearings, Inc. was founded in 1994 and is the world’s leading independent designer and manufacturer of modular air bearing products and the recognized provider of porous media air bearing solutions, sold in over 30 countries worldwide. New Way has been recognized for multiple years on Inc. Magazine’s list of the 5,000 fastest-growing, private companies in America, and as a Deloitte Fast 50 Technology company for the Philadelphia, PA, USA Region and is a past recipient of The Greater Philadelphia Chamber of Commerce’s Technological Excellence of the Year Award. New Way is located in Aston, PA. Learn more at www.newwayairbearings.com