A New Way for Bently

As a leader in its field, New Way Air Bearings has been manufacturing air bearings for the machine tool, semiconductor, and medical industries for 25 years.

The first turbo oriented show they exhibited at was the 2012 Turbo Symposium in Houston. Realizing the market potential, New Way has been preparing a line of externally pressurized bearings and seals specifically designed for the Turbo industry, (on display at TPS booth 3005 this Sept). Drew Devitt, founder and chairman of New Way Air Bearings notes, “As I studied rotor dynamics and bearing technology in the turbo industry, I was continually led to the works of Don Bently. Don saw the potential for externally pressurized gas bearings to replace hydrodynamic oil bearings, and even eliminate whip and whirl, simplifying rotor dynamic issues. I believe that with New Way’s porous media technology I can make Don’s dream a reality, and overcome the limitations of the orifice technology he was using.”

Many are familiar with Don Bently’s development of eddy current probes and rotor dynamic theory. Less are aware that Don thought his externally pressurized bearing technology would be every bit as important as the eddy current probe in the future evolution of turbo equipment. 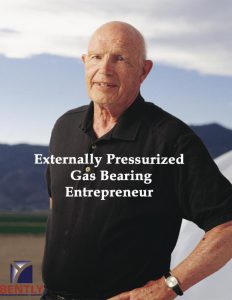 Consistent with that, in 2002, the assets of Bently Nevada Corporation were purchased in a friendly acquisition by General Electric Power Systems division. The sale of Bently Nevada Corp. enabled Don Bently to focus on bearing technology and he re-emerged as the Bently Pressurized Bearing Company. After spending a lifetime of studying rotor instabilities he was keen to develop techniques to actively control instabilities. Bently demonstrated that by changing input pressure, and hence the stiffness of his bearings, the natural frequency of the rotor system could be tuned away from instabilities. The BentlyPressurized Bearing website noted that “Pressurized bearing technology is destined to be as influential as the proximity probe in revolutionizing rotating machinery.”

Devitt shares this enthusiasm and has acquired more than just the Bently Pressurized Bearing name. New Way will be flying under Don’s technical flag as described in his book “The Fundamentals of Rotating Machinery Diagnostics.” As Devitt explains, “The reasoning and equations in his book (esp. chapter 23) are the technical foundation for dynamic models and ultimately the commercial success of the externally pressurized bearing technology we believe in.” To further that end New Way also acquired Don’s personal engineering library and one of the Bently Pressurized Bearing demonstration units will be on display at TPS, borrowed from the New Way lobby.

“Don has become a personal hero of mine”, says Devitt. “We were both selling gas bearing technology at the same time but to different industries. I am very sorry that I did not have an opportunity to meet him in person as he died October 1, 2012, just after that year’s Turbo Symposium, which was our first show in the industry. I have been able to collect some stories about Don, and that has been good fun. Based on those, I’m not sure that he would actually pass me his baton, but I’m willing to pick it up and run for the finish line anyhow and I bet that many of the people that knew Don will appreciate that. I sure appreciate Don’s strong start.” 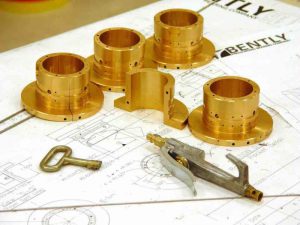 New Way will be exhibiting externally pressurized gas bearing and seal technology in booth 3005 at the Turbo Symposium this Sept. 13-15 in Houston TX