New Way doesn’t just support the sciences, but also the arts as well, and we were proud to see our air bushings and flat round air bearings help bring the GLOW event in Eindhoven, Netherlands, to life. The Large Pendulum Wave used our air bearings to demonstrate the physicality of swinging frequency through the beauty of light in motion. 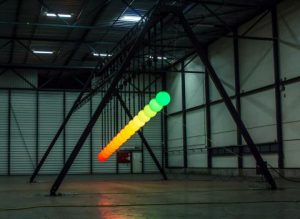 Below is a news release from IBS outlining why New Way porous media air bearings were chosen. For reference, the full article can be found here: http://www.ibspe.com/news/large-pendulum-wave—the-poetry-of-math-on-air.htm

Additional diagrams and videos explaining their use can also be found below.

New Way Air Bearing distributor IBS Precision Engineering BV applied New Way Air Bushings for a unique design into a kinetic light art experiment called Large Pendulum Wave for GLOW. In November the city center of Eindhoven, The Netherlands turns into a forum of interventions, installations, performances and events based on the phenomena of artificial light.

Large Pendulum Wave – The Poetry of Math on Air

In November the city center of Eindhoven, the Netherlands, was turned into a forum of inventions, installations, performances and events based on the phenomena of artificial light during the GLOW event. GLOW provides a platform for artists, designers and architects who are working with light.

One of this year’s projects was the “Large Pendulum Wave” with porous media air bearings supplied by IBS Precision Engineering. The Pendulum Wave is a physical phenomenon based on a number of independent pendulums that are very accurately adjusted concerning swinging period (or frequency). On a steady frame 15 pendulums are mounted. Each pendulum can swing independently from each other. See the video below.

How to deal with friction in the bearings? 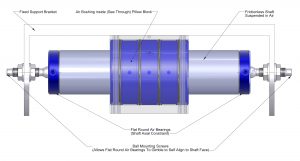 If the pendulums have pivoting points with variable friction coefficient, it is not possible to calibrate the swinging periods and consequently the patterns do not appear in the sequence. In the large version the bearings become even more important because of the longer sequence time. For the small version the pendulums are often made of a small mass hanging on two strings. As mentioned above, strings are not possible as we want to speed up the swinging periods using a heavy mass on a rigid pendulum pipes. A bearing ‘quest’ eventually led to the most desirable solution: air bearings! These special air bearings are made of (porous) graphite that minimizes the air flow. Each pendulum has its own set of 3 bearings, one cylindrical main bearing and two flat bearings to prevent the shaft from horizontal movement. One pendulum weighs about 60 kg and it is floating on a 0.004 mm layer of air!