The Evolution of Grinding Machine Designs

The first machines for cutting iron were made of wood. It soon became evident that the wood would wear out and that the machine for cutting iron should be made of iron. Linear motion in these original grinders was achieved by “plain sliding ways.” Plain sliding way surfaces made of iron could be single point cut with the tooling of the time and hand-scraped to achieve excellent straightness and flatness of motion. Oil lubrication reduced friction and wear, providing useful life. For at least 100 years, this would be the dominant material and bearing technology.

Plain slides are well suited to grinding applications. The large amount of surface area in contact, combined with the oil layer, results in high static stiffness and high damping. One of the problems with plain slides is that the friction to initiate motion is higher than the friction to sustain motion. This is because plain sliding bearings actually become hydrodynamic bearings as the slide rides up on a film of oil during motion. Controlling small increments of motion is made difficult by this stick-slip effect.

As metrology advanced and it became possible to harden high quality steel, rolling element bearings became practical. Hard surfaces are necessary because rolling element bearings have “point” or, at best, “line” contact, which is theoretically zero contact area. This results in very high loads on a small surface area. The great advantage of low surface contact is low friction, which reduces the stick-slip problem and speed limitations of plain ways. However, the disadvantage of low surface contact is low vibration damping properties.

Hydrostatic bearings were another technical development attempting to improve on plain ways. In this case, a pressurized oil is metered into a pocket and then it escapes through a small gap between two closely matched surfaces, completely eliminating contact between moving members. Technically, this reduces the static coefficient of friction to zero, and the dynamic coefficient of friction increases with speed from viscous sheer drag . Zero static friction eliminates the stick-slip phenomenon, and the viscous sheer creates an axial damping that makes acceleration and positioning easy to control. The oil layer also produces a squeeze film damping that gives hydrostatic bearings the highest vibration attenuation among the bearing types. Not surprisingly, hydrostatic bearings have most commonly been applied in grinding machine designs.

In a conventional hydrostatic design, the flow of oil into the bearing is controlled or compensated by a capillary or orifice. The oil flows into a pressure pool which is about .030 to .060 inch deep. The pool is surrounded by a land which is closely fit to the guide surface usually .0005 to .001 inch. The gap between the land and the guide creates the restriction that keeps pressure in the pool. The trick is to balance the flow into the pocket with the flow out between the guide and the land, and to balance the pressure and, hence, the force with the pocket that is opposing or preloading it. This tuning process is accomplished by adjusting the length of the capillary or the size of the orifice to match the actual bearing gaps. It is a tricky turning process because the flow through the gap is a cubed function of the gap. This also requires very tight manufacturing tolerances because small changes in the size of the guide will change the gap, resulting in large flow changes.

Bryant Grinder Corp., of Springfield, VT- is an example of a company that has evolved from plain ways to rolling element to hydrostatics. Their round linear ball bushing was an early departure from plain ways and has evolved into hydrostatics. By using Moglice and advanced replication techniques, Bryant has been able to reduce bearing land clearances, significantly increasing stiffness.

In summary, although hydrostatic bearings have the best technical properties for grinding machines, they require considerable skill to manufacture.

However, Dr. Alex Slocum of MIT has recently described and patented a highly deterministic gap compensation method of controlling the flow of fluid into a pocket. The concept is to use the fact that flow is highly sensitive to change in gap to advantage by using the gap on one side to control the flow of fluid to the other side. For example, in a box way design a load displacing the slide down will close the upper gap and open the bottom gap. In the instant that the lower gap gets wider, more flow and pressure are hydraulically ported to the top pressure pocket to compensate for the load. This restoring force results in high stiffness that is insensitive to changes in the guide thickness. The self centering tendency improves performance and makes the system easier to manufacture. Gap compensation is a form of self-compensation in that the gap on the opposite side replaces the capillaries or orifices and eliminates the tuning process. Plumbing is also simplified because one line can feed many compensator pads.

New Way® high stiffness hydrostatic slide units in standard designs employ a patended hydrostatic design which has no capabilities or restictors. One supply line feeds twelve compensators and pressure pockets. Hydrostatic fluid is contained in the “T” slot and returns through the base. They are convenient to mount and are available as direct replacements for many machine slides including Heald I.D. grinders.

The Torrington Co.ís Advanced Machinery Center has used this technology in slide units manufactured by New Way Machine Components replacing original Heald slides with gap- compensated hydrostatic stages. By purchasing out of the box hydrostatic stages, Torrington has reduced the time required to rebuild a machine and has increased the performance compared to the original hydrostatic design.

Weldon Grinders, York, PA – has also employed gap-compensated stages designed by New Way. In yet another advance, the Weldon Gold Machine uses process coolant as the hydrostatic fluid. This is not a revolutionary idea; it had been tried before, but not successfully. The problem is that microbes grow in water based fluids. Although the systems work fine at first, sooner or later microbes growing down stream of the filter come loose and clog the restricting orifices or capillaries. Failure is the result. Gap compensation works with water-based fluids because there are no small openings to clog. The bearing gap is the only restriction, and the relative motion between the guide and the compensator chews up and spits out soft contaminants.

The ability to use water-based hydrostatic fluid has significant advantages. When using water-based process fluids, the same fluid can be used in the hydrostatic system, making a unifluid machine possible. By temperature controlling bearing and process fluid, thermal errors can be minimized, and the possibility of cross contamination between oil and water systems is eliminated. The lower viscosity and higher heat capacity of water also enable higher speed and cooler operation than oil.

But water-based coolants for hydrostatic fluids do have disadvantages. Water does not have the lubricity of oil and can be harder on pumps. Although coolant does have rust inhibitors, metal components are more likely to corrode in water-based environments. 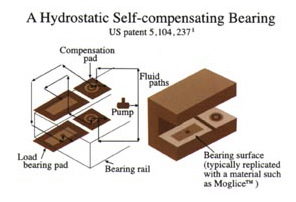 New Way® high stiffness hydrostatic slide units in standard designs employ a patended hydrostatic design which has no capabilities or restictors. One supply line feeds twelve compensators and pressure pockets. Hydrostatic fluid is contained in the “T” slot and returns through the base. They are convenient to mount and are available as direct replacements for many machine slides including Heald I.D. grinders.

New Way® slide units have an inside/out design where the longer guide way wraps around a shorter bearing block. This makes it possible to do all the cross porting required for gap compensation technology within a single bearing block.

The structural components of this end grinder are made completely of Alumina ceramic. Coolant based gap compensated hydrostatic bearings have been in operation over two years. Wilbanks International in Hillsboro, Oregon built the machine for squaring the ends of ceramic guide beams. They manufacture for the metrology industry. This machine blazes a new trail in machine design.

It is this thought that brings us to considering non-metallic materials. Alumina ceramic, for instance, is non-corrosive, has three times the stiffness to weight ratio of steel, and 1/2 the coefficient of thermal expansion. For precision machine builders, these advantages will be difficult to ignore. The high structural stiffness of ceramics, combined with the damping of hydrostatic bearings, should be especially useful achieving fine surface finishes on hard materials, or minimizing subsurface damage on ceramic parts. It is interesting to note that machines made of metal experience accelerated wear form the abrasive particles when grinding ceramic parts. Shouldnít machines that grind ceramics be made of ceramics?

Nick Sotiropoulos has been Chief Engineer, specializing in the design of fluid film bearings, with New Way Air Bearings since 1993.