Keck Observatory, often considered the world’s most scientifically productive observatory, turned to New Way when they needed help replacing their rolling-bearing-based rotary encoder. A system built on radial and flat round air bearings allowed for a new 1-meter diameter rotary table, cutting acquisition time by 75% and reducing maintenance to near zero.

Astronomers from around the world travel to The Keck Observatory to observe the universe. Its telescopes operate at a nanometer level of precision and are considered to be some of the largest telescopes in the world.

To continue providing this level of precision, Ean James, Staff Mechanical Engineer at The Keck Observatory, was tasked with updating their angular measurement device. New Way flat round and radial bearings were used as a friction-free bearing system to ensure accurate measurements by the encoder.

The Need for a Change

Originally the telescope utilized a mechanical roller track system. It would turn an encoder which kept track of the azimuth and elevation angle measurements. While the system worked well initially, over time the mechanical aspects of it caused:

All of this affected operations and accuracy. Each night the team spent a significant amount of time trying to acquire the observation target for the evening; they couldn’t point it accurately enough to find target locations.

“It was apparent we needed something better,” remarks James. 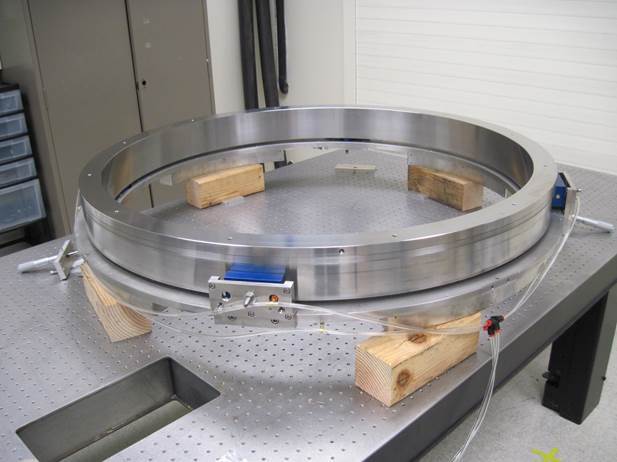 “We had a very difficult problem we were working on,” comments James. Their design solution for the azimuth included a 1-meter rotary device with no friction to achieve nanometer precision.

Further complicating the issue was the slow movement of the telescope, approximately 1 degree/second, driving the need for a bearing with no stiction as well. Any vibration or jitter from starting/stopping the telescope could invalidate the target position.

“We didn’t want any friction,” says James as his team searched for another solution.

James and team received a recommendation from a colleague who had previous experience with New Way. James investigated further and realized with air bearings, he could achieve both zero friction and zero stiction requirements. The team at Keck began working with New Way and selected radial bearings and flat round air bearings to create a 1-meter rotary table.

“They were so easy to implement,” James comments. He notes how “well-behaved” the hardware was, adding that the bearings were, “so straightforward and robust; it just works.” The bearings drew so little air, the existing air supply system wasn’t impacted.

“It was a huge success,” remarks James when asked to comment on the results of using New Way products. He goes on to explain the increased operational efficiencies of the telescope. The accuracies enabled by New Way’s products decreased the nightly target acquisition time from 1 hour to 15 minutes. The observational efficiencies at Keck have dramatically improved, allowing more and longer observation times than could be done before.

Beyond the accuracy improvements though are the maintenance aspects. James mentions the system has been “trouble-free” while operating on both telescopes for almost 5 years continuously and he says they, “expect it to run for the next 20 years.”

Not only did James and his team get the results they desired, but he says “from an engineering viewpoint, it was fun.” If you are ready to have some fun with Frictionless MotionTM, contact us today for a complimentary consult for using air bearings in your application!